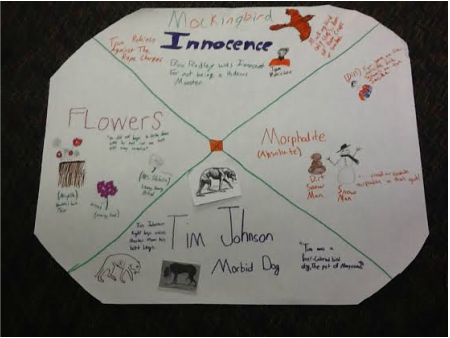 The purpose of the project is to find out what are the symbols and definitions of the 4 things we had to do which were, flowers, morphodite, Tom Robinson, and mockingbird. The symbols create the motif by helping you understand the definition or the example better. They are examples of the motifs and that helps you understand the word better. The symbols give the example a more helpful meaning.
The symbol of the mockingbird was innocence. I thought it was innocence because the mockingbirds just sing and do not bother anyone. Like Tom Robinson, he was innocent but they put him to prison anyway. I think it was just because people did not like the blacks back then.
The second symbol is morphodite and the meaning of that was to change and absolute. This happened when Jem and Scout made a snowman but they put dirt inside the snowman and so when it melted it made a black snowman. No one liked it and wanted to destroy it. Dill changed because he was fun and loving on the outside but deep down he was hurt because his parents were divorced and because of the trial outcome.
The third word is Tim Johnson and the meaning of that was morbid dog or mad dog. Tim was a liver-colored bird dog the pet of Maycomb. I think this is important because people realized that he was a morbid dog. People seen that he did not have rabies and was just the pet or dog of Maycomb.
The fourth symbol is flowers and the meaning of them were that Mrs. Dubose's Camellias represent the prejudices which cannot be brushed off easily. They have to be tugged by their roots. Miss Maudie's Azaleas are known for opening their flowers all at once a d before the Tom Robinson trial Miss Maudie has a verbal battle with the foot-washers or the Puritans who criticize her for having such showy flowers.
The motifs help create the symbols and the symbols help create a better understanding of the meaning or definition of the motif. The motif morphodite helps created the snowman symbol because morphodite is to change or differences and the snowman changes when it melts and creates a black one. The mockingbird symbol was innocence because mockingbirds do not do anything they just sit and sing and do not bother anyone. Tom Robinson was like a mockingbird because he was innocent but yet he died for nothing.